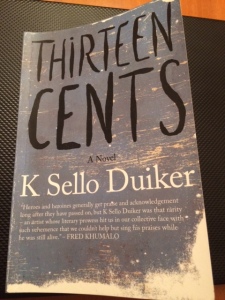 Thirteen Cents is a shock to the system; a punch to the solar plexus; a very grim read but brilliantly executed. It is written from the perspective of a homeless, twelve year old boy Azure, pronounced  Ah-zoo-ray, as he tells us, who has to think of himself as a man. It is set in a Cape Town that is very different from the one many readers know. This book was published in 2000 and I have been asking myself why I have not read it before, especially as it is highly acclaimed and I knew this. After the first few pages, I realised why I had avoided it for so long. I have an aversion to novels where taking drugs is a strong element; not sure why, but I do not like reading about people in drug induced states. I know I should not limit myself this way but, after all, I read for enjoyment as well as for illumination. Azure also hates drug-taking though he likes zol.

The feat of having written this book is quite amazing; K Sello Duiker gets right into the head of Azure, or Blue, as he is later dubbed. It is written in the present tense, which gives it an immediacy, and simultaneously describes his movements and his thoughts, the questions he asks himself and his commentary on his life and situation. His thoughts jump around apparently randomly in a stream-of-consciousness way but without the obscurity sometimes encountered with the use of this narrative device. Azure has an unimaginably tough life; the things he has to do simply to eat are horrific but, worse than this, are the gangsters with whom he has to interact and who rule over him. Despite his tough, aggressive exterior he is also naïve in some ways, trusting some people that are not at all trustworthy.

He has to go to great lengths merely to get a pair of shoes; he tries many different avenues only to be thwarted at almost every turn. Yet he narrates his obstacles in such a matter-of-fact way that it reinforces the heart-breaking hardship of his situation. He says “grown-ups are strange people” as if adults are a completely different race that is beyond his comprehension. In this regard no doubt we can all agree with him.

The sex and violence are extremely graphic so this novel is certainly not for the faint-hearted nevertheless it is worth overcoming this barrier to get to know this boy, Azure. He crawled under my skin with his alternating innocence and cynicism. He has to endure dealing with people who are irrational, violent and treat him in the most extreme and cruel way. Imprisoning him, starving him, assaulting him. And for no very good reason other than that they can and to exercise their own power or exorcise their own demons. He becomes nothing but a message to others. It is truly awful. I find myself cringing with every blow.  He retreats into his mind to survive. In one incident he is locked out and left on a roof of a building for three days with nothing to do but watch the “men pigeons …always trying to screw the women pigeons”. He hates pigeons and believes they are rats with wings so when the seagulls arrive and “terrorise the pigeons”, he is delighted. He relates to the seagulls and finds them beautiful because “they always wash at sea with cold water”. As he does. Passages like these simultaneously show his ignorance and his wisdom while his mind and imagination help him carry on.

Later he journeys up Table Mountain in a mad frenzy to escape Gerald, the psychopathic gangster who re-named him and made him fear for his life, every second of the day. He keeps staring directly into the sun “with open eyes and feel[s] energy going through…[him]”. He experiences dreams and delusions interspersed with real moments. It is powerfully portrayed.

The blurb on the back cover tells the reader that “K. Sello Duiker was born and raised in Soweto, South Africa, and went on to study journalism at Rhodes University before moving to Cape Town. His varied experiences while living there form the basis of Thirteen Cents.” I cannot help wondering how he experienced the life of street children as the brief bio here gives the impression that not only was he very well educated but also that he grew up elsewhere. However he did it, it is certainly a masterful interpretation. I will never again look at the young boy walking past me with broken shoes and grubby clothes without wondering how he came by those shoes and where he manages to wash himself.

Book worm. Book lover. Raised on Enid Blyton but have progressed to sterner stuff. Only read real books. e-Reading does not work for me as I immerse myself in the book, I live in its pages and I need that to be physical even though it is virtual in a way. I love reading especially SA fiction. I now write reviews on the books I read. My other major hobby is birding which gets me into our beautiful outdoors. View all posts by Penny de Vries