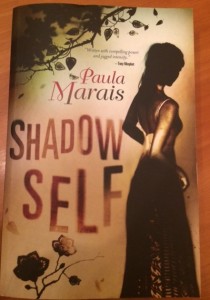 Thea is in jail. She is confused and disoriented, barely able to comprehend what is happening. The police escort her to a courtroom and she is asked to plead guilty or not guilty. It is unclear what crime has been committed. This is only revealed at the end of the novel though there are hints.

The narrative goes back in time and shifts between the perspective of her daughter, Sanusha, when she was five years old, and Thea’s reflections on her childhood in the seventies as well as her first marriage. Stuart and Veronica, who already have a three-year-old son, Robbie, adopt Thea when she is six weeks old. Thea adores Robbie who is kind and protective towards her. Family life is disrupted when Robbie becomes ill with cancer. She tries to make herself invisible so her parents “would forget that the wrong child is dying.” This shows she never feels accepted by her adoptive parents. Especially Mother, who was very concerned with “what was seemly, and what wasn’t”. She is also a cruel, abusive parent and a secret drinker. Her attitude to Thea is inexplicable. Things become worse when Robbie dies and Thea is ill-treated and feels unloved and rejected. In usual teenage fashion, she acts out by drinking, smoking and sleeping around and then, to the dismay of her parents, falls in love with, and marries, an Indian man, Rajit.

Sanusha paints a child’s picture of the shaky marriage; how her mother is always sad and in bed, how her mom has bruises that she says come from not turning the light on when she goes to the toilet at night; how her father prefers his mother’s cooking and flirts with the nursery school teacher. Her voice and mode of expression seem a little too sophisticated and knowing for a five year old, especially in the eighties.

At this stage of the narrative, 82 pages in, the storyline is disjointed, a little confusing and not very convincing. However, it is worth persevering past this point. Once the perspective shifts to that of Clayton, who had already been alluded to as her second husband, things begin to fall into place. Thea meets Clayton at the coffee shop where he works. His impression of her is that she is lonely and “skittish like a newborn giraffe” and his observations of her behaviour when she is at the coffee shop with her mother-in-law or her husband  give the reader an outsider’s view that validates Thea’s perspective. He falls in love with her to the point of obsession and begins to gain her trust.

It becomes clear that all is not well with Thea; she becomes convinced that Rajit is having her followed and she crashes the car trying to escape and lands up in hospital.   A year later, she runs away without telling anyone where she is going. She is depressed, hopeless and has been having deeply disturbing dreams. This cracks her already rocky relationship with her daughter. Thea was always envious of mothers who seemed to manage their children with such ease when to her it is an alien space. The distance between Thea and Sanusha and their inability to reach out to the other is extremely well depicted.

Eventually Thea returns and attempts to reconstruct her life; in time her and Clayton marry and she is happy at last. Unfortunately this does not last. He is desperate to have children and she eventually succumbs, which is the worst thing they could have done. Having a baby  leads to greater issues than either would ever have imagined as she suffers from severe post-natal depression. Her brother, Robbie, though dead is her constant companion. Her tortured mind leads to a complete disintegration.

This portrait of a woman overcome and overwhelmed by depression and anxiety for most of her life is excellent. Despite a relatively understanding husband, even he cannot fully comprehend the dark depths into which her mind sinks; the delusions that plague her and lead to the tragedy. It is very sad. Also a gripping read, one becomes involved in willing her to regain her mental health and live a normal life. As is often the case with SA fiction these days, the themes and topics explored in Shadow Self are not overtly South African in nature yet South African readers will find the context, environment and characters familiar.

Book worm. Book lover. Raised on Enid Blyton but have progressed to sterner stuff. Only read real books. e-Reading does not work for me as I immerse myself in the book, I live in its pages and I need that to be physical even though it is virtual in a way. I love reading especially SA fiction. I now write reviews on the books I read. My other major hobby is birding which gets me into our beautiful outdoors. View all posts by Penny de Vries